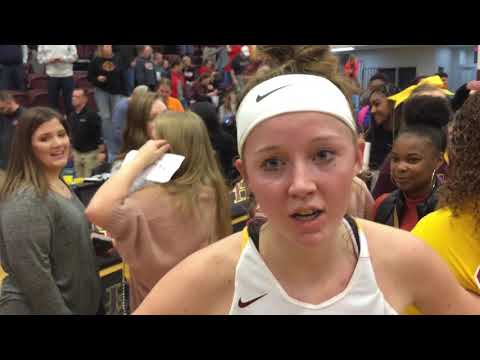 When a team has two unstoppable players, Murfreesboro can change from a dream to reality.

Alasia Smith and Jeila Greenlee combined to score all but nine of Science Hill’s points, and the Lady Hilltoppers overcame 10 missed free throws in the fourth quarter. The 55-52 victory over Maryville came in a Class AAA sectional Saturday night at The New Gym and put Science Hill in the state basketball tournament for the first time since 2013.

Improving to 31-3 on the season, Science Hill will find out Sunday who its opponent will be in the opening round of the state tournament. The Class AAA quarterfinals are split between Wednesday and Thursday.

“Our kids earned respect for every team in our district,” said Lady Hilltoppers’ head coach Scottie Whaley. “We don’t get a lot of respect up here sometimes. I could not be happier for our kids with the guts they showed, and the assistant coaches for the work they put in. I also want to thank Darrell Barnwell and Keith Turner for giving me a chance, and starting this. And there was great crowd support tonight, too.”

After Maryville made one of two free throws to take a 52-51 lead, Smith rebounded the miss and handed off to Greenlee. She brought it up the court, drove hard to the block, created space, and banked in a soft jumper with 42.2 seconds to go.

“I just knew no matter what I was going to get fouled or I was going to make it,” said Greenlee. “I knew if I didn’t, there was a chance we would lose so I went with all I had.”

Maryville threw the ball out of bounds on the next possession, and fouled Greenlee on the in-bounds pass. She missed both free throws, and Courtney Carruthers missed a good look from 3-point land on the other end.

Erin Egerbrecht was fouled with 15.8 seconds remaining, and she calmly drilled both tosses.

“I was just thinking we were this close, and we worked so hard for this,” said Egerbrecht. “We wanted this so badly, and I needed to finish it off.”

Another good look from trey country on the other end wouldn’t drop for Maryville.

Smith was fouled after the rebound and missed both free throws, but Maryville threw the ball away on the in-bounds pass. Smith came up with the loose ball and time expired.

Maryville had a 49-46 lead with 2:04 left in the game, and had possession of the ball. A Science Hill player knocked it loose in front of the Maryville bench and the ball went out of bounds. One official mysteriously ruled it hit off the Maryville player’s knee, much to the chagrin of Lady Rebels’ head coach Scott West.

“They had two hands on it,” said West. “I’m not going to complain about the officiating. It did not go our way. Science Hill is a great basketball team. Alasia Smith is a great player. We just didn’t get the breaks we needed. The locker room in there is crushed.”

JUST TRY TO STOP HER

Maryville threw what seemed like its entire roster at Smith, and all they did was join their teammates in foul trouble. The Lady Rebels were whistled for 25 total fouls with a boatload of those sending Smith to the foul line for 20 attempts.

“When people play behind you in the post, you have to make them pay,” said Whaley. “We’re going to throw it in there, and we expect our kids to score or get fouled.”

Smith said she just kept going back to work when she got the ball.

“I felt like it was hard for them to guard me, but I still went up strong and did what I had to do,” said Smith.

Science Hill didn’t get every loose ball, but the Lady Hilltoppers got way more than their share.

“We gave up a few, but our kids got a lot of them,” said Whaley. “We got on the floor, and we had some kids make some great plays. In these games you have to win 50-50 balls and you have to rebound. All of our kids battled their butts tonight.”

Denae Fritz was all over the paint for the Lady Rebels (30-4). She totaled 13 points, 16 rebounds and three assists.

Furman University signee Lindsey Taylor totaled only one point and had six rebounds as she was saddled with foul trouble much of the game.