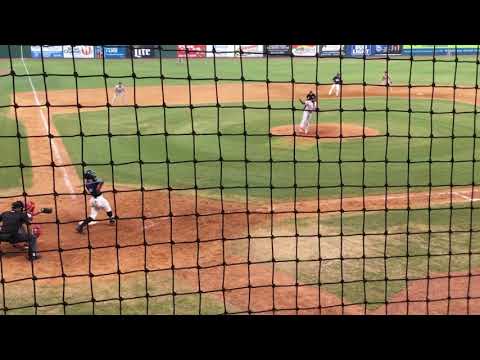 ELIZABETHTON — Johnson City has received two hard lessons on finishing — thanks to Ruben Santana and Elizabethton.

Santana had his second straight walk-off hit — capping another come-from-behind late victory — delivering an RBI single to right field in a wild 13-12 10-inning decision over the Cardinals in an Appalachian League game Sunday night at Northeast Community Credit Union Ballpark.

“We battled to the end and we didn’t quit,” Santana said through interpreter Richard Salazar. “We got the tie ballgame, and then we just continued fighting.”

After 24 runs, nine innings and no decision, Elizabethton and Johnson City went to the Appy League’s setup where a runner is placed on second base to start the extra inning. Johnson City couldn’t push a run across, leaving the door open for the Twins.

Kidany Salva drew a leadoff walk, bringing Santana to the plate. Santana ripped a pitch down the right field line to touch off a celebration.

“I knew the pitcher was a little wild, but I was ready to attack and that was my pitch and I needed to hit that one,” said Santana.

Elizabethton trailed by five runs entering the bottom of the ninth, and got the help it needed. Alex Gallegos walked three batters and exited the mound. Wilfredo Pereira entered in relief and struck out Albee Weiss, but walked Matt Wallner to force in a run to make it 12-8.

Charles Mack followed with a no-doubt grand-slam shot over the right-center field fence to tie the game.

“He hadn’t done much at the plate up to that point, but he understands every at-bat is a new battle,” said Smith. “He got a pitch he was looking for and he juiced it.”

It was nice day at the dish for Johnson City’s Trejyn Fletcher. He finished 2 for 5, hitting a three-run bomb and also adding a two-run double.

Coming into the game, the Cards’ second-round pick had just three hits in 19 at-bats and had struck out 12 times. But the 18-year-old from Wilmington, Delaware, found his stroke.

Trailing 3-1, Johnson City put up an eight spot in the fourth inning.

Chandler Redmond started the hitting festivities with a double, and Zach Jackson walked. Fletcher followed with a three-run homer to give the Cardinals a 4-3 lead.

Elizabethton left fielder Trevor Jensen dropped a potential fly out, pushing the Cards to a 5-3 edge. Diomedes Del Rio followed with a two-run single. Mateo Gil capped things off with a two-run homer to give Johnson City a 9-3 advantage.

ELizabethton made a move to get back in the game in the fifth inning. Santana started the two-out rally with a single, Max Smith followed with a single, and Seth Gray absolutely crushed a bomb over the right field fence to make it 9-6.

Albee Weiss kept the two-out fun going with a double, and Wallner plated him with a single.

For the Cardinals, Gil, Lott, Fletcher and Sabino had two hits apiece. Fletcher had five RBIs while Gil and Del Rio each had two.