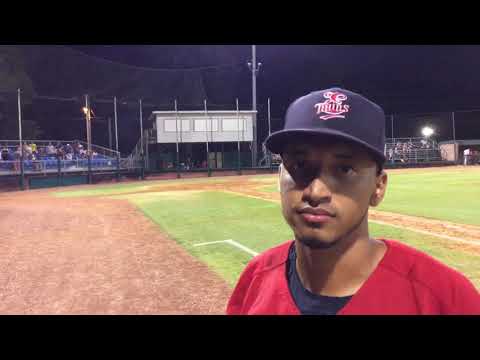 ELIZABETHTON — It seemed to be a story about Johnson City’s pitching, but Ruben Santana changed everything with one swing.

Santana’s fly-ball double, placed perfectly in the left-center field gap, scored two runs in the bottom of the ninth inning to give Elizabethton a walk-off 3-2 win over the Cardinals on Saturday night at Northeast Community Credit Union Ballpark.

“That’s the nature of the game,” he said. “You have to keep battling and make every out a tough out. It’s how it ends, not how it starts. It’s so strange. Last night we had 16 runs and tonight we couldn’t push a run across until the eighth inning. You just have to play all nine innings and keep fighting.”

The win lifted Elizabethton (14-10) into first place in the West Division of the Appalachian League. Johnson City fell to 13-10.

The Cardinals and Twins play the second of a four-game set Sunday with first pitch set for 5 p.m.

Trailing 2-1 with nobody on and one out, Matt Wallner drew a walk and Will Holland entered as a pinch-runner. After a strikeout, Janigson Villalobos walked to bring Santana to the plate.

“I was looking for a good pitch I could put the barrel on,” said Santana through a teammate interpreter. “The pitch was right there, I got the barrel on it, and that got the result.”

The Cardinals’ outfielders had no chance to catch the ball, and when it reached the fence Villalobos scored all the way from first base.

“I feel good because we were playing a team that was at the top (of the division),” said Santana.

IT HAPPENS EVERY SUMMER

Cardinals’ starter Michael YaSenka seemed to have pitches that couldn’t find wood. In five hitless innings, he threw 48 of his 76 pitches for strikes. The 21-year-old out of Eastern Illinois University walked two and recorded more than half of his 15 outs by way of the whiff (eight strikeouts).

The no-hitter didn’t last long after YaSenka exited the mound. Elizabethton’s second batter in the sixth inning, Willie Joe Garry Jr., hit a chopper down the first base line. The new pitcher, Tyler Peck, appeared to be caught between a tag or a toss. He fielded the ball with his glove and tried the glove flip to first, but Garry scooted across the bag safely.

Johnson City finally ended the zero theme in the top of the seventh inning.

Kyle Skeels got it rolling with a sharp one-out single. With two outs, Terry Fuller zipped a line drive toward left-center field. A diving Spencer Steer couldn’t flag it down and it rocketed into the gap for an ice-breaking single.

After the game, Steer found out he had been promoted to Class A Cedar Rapids.

The Cardinals stretched their lead to 2-0 on Trejyn Fletcher’s RBI single in the eighth inning.

Elizabethton got close in the bottom of the eighth inning. Santana hit a one-out double and came home on an RBI single by Garry Jr.

Elizabethton’s newest arrival, Sawyer Gipson-Long, made his professional debut on the mound. He started and was limited to two scoreless innings, allowing one hit with three strikeouts and no walks.

Gipson-Long pitched for Mercer earlier this year. In a 5-4 win against East Tennessee State University, he struck out 11 batters in seven innings of work.

Todd Lott led the Cardinals at the plate, finishing with three hits. Liam Sabino and Kyle Skeels each had two hits.

Santana and Garry Jr. each had two hits for the Twins.