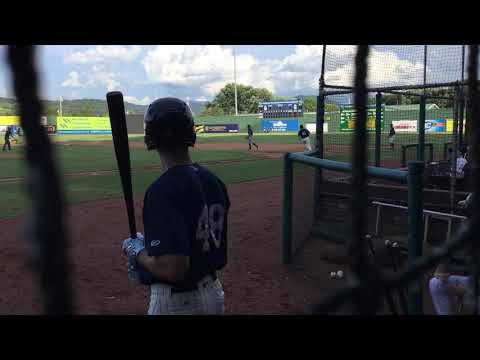 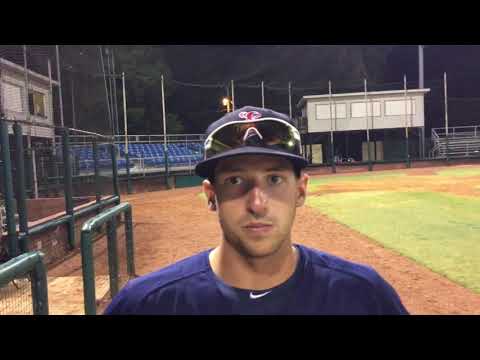 A third-round pick in this year’s Major League Baseball draft, the University of Oregon product hit a leadoff homer in the bottom of the first inning and ended the game with a sparkling defensive play, preserving Elizabethton’s 6-5 win over Bristol on Tuesday night at Northeast Community Credit Union Ballpark.

Elizabethton improved to 4-3 for the Appalachian League season, standing in a second-place tie with Kingsport in the West Division. Each team is a one-half game behind Johnson City (4-2). Bristol fell to 1-6.

Steer joined the team late last week, and has a hit in each of his three games. The homer was his first as a professional.

“It was a 3-1 count, and I was looking for a middle-in fastball, and I got it,” said Steer. “And I was able to put a good swing on it. I’ve only been out here a couple days, and I’m starting to get my feet wet. To have success this early feels good.”

On the game-ending play, Steer went hard to his right and backhanded the hard-hit ball. He spun around, gunned it to first base and easily got the runner.

“The ball was hit pretty well,” said Steer. “I know the runner at the plate, and he’s not a great runner. So I knew I had some time once I got the ball. So all I had to do was get it to my first baseman.”

Twins manager Ray Smith said, “That was a great 360, 6 to 3. I didn’t see that coming. He showed a little snap in his arm. The first couple of games I was a little concerned about his arm strength, but tonight he made a couple of pretty good throws.”

The first half of the game produced 11 runs, but pitching highlighted the remainder of the contest.

Elizabethton’s Denny Bentley was roughed up for four runs in the fifth inning, but got through the sixth scoreless. Osiris German followed with a pair of shutout innings, racking up four strikeouts.

Nate Hadley closed it out in the ninth for his first save.

For Bristol, Enrique Santana allowed four hits in three relief innings, but didn’t give up a run and didn’t walk anyone. He struck out four. Oliver Garcia followed with a scoreless eighth inning.

Elizabethton turned on the run machine in the second inning. Max Smith started the scoring with an RBI single to make it 2-1. Albee Weiss later added a bases-loaded double to push the Twins’ edge to 4-1.

Bristol fought back into contention by putting up a four spot in the fifth inning. Brendt Citta’s two-run single was the biggest hit of the frame.

Starting with a bang, Jesus Valdez hit the third pitch of the game over the left field fence for a 1-0 Bristol lead.

Not wanting to be outdone, Steer’s blast went out to left-center field.

Matt Wallner had a pair of hits for the Twins. Smith and De La Cruz also collected a pair each. Charles Mack drew three walks.

For the Pirates, Valdez and Citta each finished with a pair of hits.