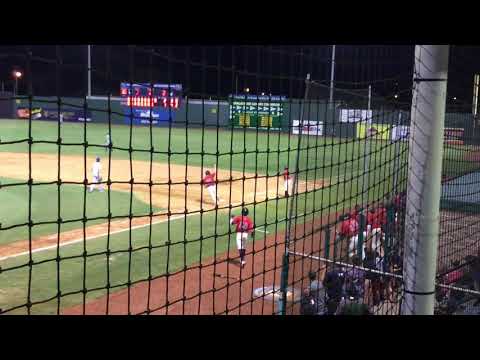 ELIZABETHTON — Fireworks started one batter before they were scheduled.

Tyler Webb lit up the sky with a walk-off two-run double, lifting Elizabethton to a come-from-behind 3-2 win over Bluefield in the Appalachian League baseball season opener for both teams Tuesday night at Northeast Community Credit Union Ballpark.

“It’s pretty cool,” said Webb. “We’ve been down in Florida for a few months. And to finally get out and play in front of some fans, and do something exciting on the first day, it was awesome.”

Trailing 2-1, the Twins loaded the bases and Webb had a 3-0 count at the plate. He took a pitch he thought was a ball, but the umpire pulled the trigger. He took another pitch and started to first, but the umpire called him back again.

On the next pitch, Webb didn’t let the umpire intervene. He crushed a line drive over the right fielder’s head.

“I’m not going to lie, I thought it was out,” said Webb, who is from Texas. “It didn’t go out, but when I saw him running back I felt like I got it pretty good.”

Webb was mobbed by his teammates before he reached third base.

Elizabethton had been unable to get much going at the plate against a pair of Bluefield pitchers, so the Twins carried a slim 1-0 edge into the eighth inning. They also carried a no-hitter.

After a one-out walk, Eric Rivera stroked an RBI double to right field for Bluefield’s first hit. Rivera moved to third on a groundout, and eventually scored on a wild pitch for the 2-1 lead.

Albee Weiss, a returning player from the 2018 championship squad, drove a single to left field in the second inning for the game’s first hit. Weiss, a 23-year-old outfielder from California, moved to second on a wild pitch.

Yeremi De La Cruz followed with a solid single to right field, bringing Weiss to the plate for the Twins’ initial run of the season.

Prelander Berroa had no-hit stuff, but wasn’t economical with his pitches. The 19-year-old right-hander from the Dominican Republic threw 4 2/3 no-hit innings. He walked three and struck out seven, helping bump his pitch count to 84 — necessitating an exit from the mound prior to qualifying for a shot at the win.

J.T. Perez made a smooth transition from Berroa’s start. The 6-foot-4 right hander from Ohio breezed through 1 1/3 innings without getting touched.

Steven Cruz went to the mound in the seventh inning, and he was dominant. He needed only nine pitches to whiff three batters in succession.

However, Cruz couldn’t maintain his command in the eighth inning. He threw 17 pitches with only seven for strikes, and the patient Blue Jays made him pay.

Erik Cha was credited with the win. Webb finished with two hits.

Yunior Hinojosa took the loss for the Blue Jays.