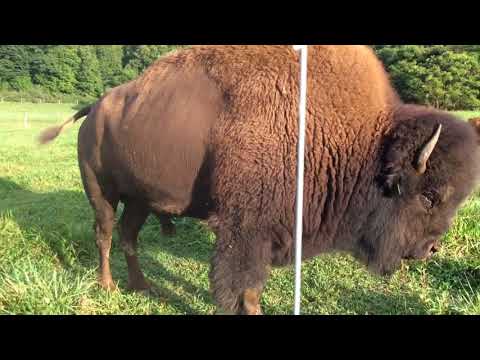 UNICOI — Of the estimated 350,000 bison in North America today, three of the newest arrivals live in Unicoi.

The little buffalo herd at Farmhouse Gallery & Gardens has grown to nine bison, including two heifer calves and one baby bull. Two of the cows may be pregnant again, and more calves are expected in the spring.

Sammy, the bull of the herd, now stands nearly 6 foot tall at his shoulders — and is still growing. And more than ever, he is living up to his nickname, Sammy Fathead. His massive head is encircled by a thick dark mane that extends beyond the sharp points of his curved horns.

For summer, the bull has rubbed the woolly coat off more than half his body. The cows have also rubbed their fur to tatters.

Owner Johnny Lynch collects the fur from the trunks of trees where the bison leave it. He has gathered two bags full and acquired an antique sock-knitting machine with thoughts of cranking out blended wool and buffalo fur socks known for their warmth and softness.

Believed to be the first buffalo born in Unicoi County in more than 300 years, the oldest calf was born in April and is now 4 months old. Her younger siblings, another little heifer and a baby bull, came along in May and early June.

All buff-colored at birth, the oldest calf has turned dark brown, and younger two are now bright cinnamon. They are often found at the center of the herd surrounded by the cows and bull for protection.

Lynch said the young heifers will stay with the herd, but will be separated from Sammy in a few years to prevent any inbreeding. The baby bull will be sold eventually, either for breeding or for meat, to prevent him from fighting with Sammy.

Bull bison, and cows too, are dangerous creatures and two rivals in the same herd would be unmanageable. But Lynch said the little bull, who has already budded horns, will stay around for at least a year.

All of the cows must prove themselves. It’s a growing herd and good mothers are a necessity. Two of this year’s calves did not live, and one has been adopted by another’s mother. “I don’t know what kind of deal they made,” Lynch said with a laugh at their arrangement.

For wild animals, these buffalo have grown used to visitors who stop by quite often to see their progress.

Besides its small size, Lynch said the difference in this herd and the big herds out West is how close their 16 well-fenced acres allow people to come to them.

VIDEO: “A close up view of the buffalo in Unicoi” by Sue Guinn Legg